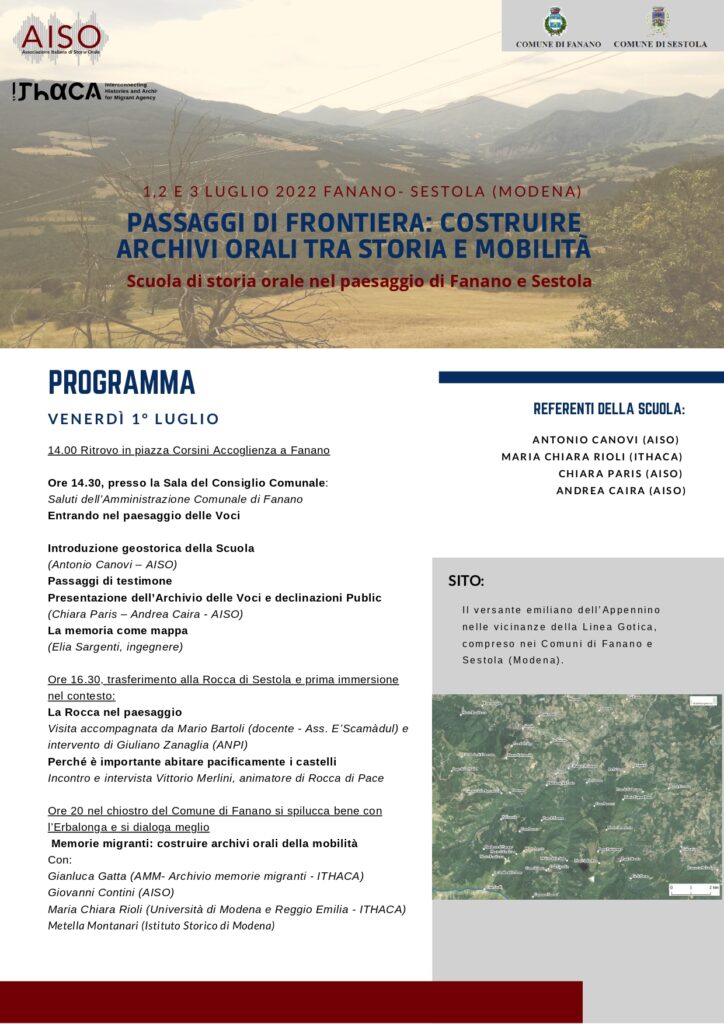 On 1, 2 and 3 July, the ITHACA Special Policy Council was held in cooperation with AISO – the Italian Association of Oral History – and other partners including ANPI. The initiative was part of the “L’Archivio delle Voci” project promoted by the Municipalities of Fanano and Sestola and supported by the Emilia-Romagna Region for enhancing the history and memory of the twentieth century. The three days were very intense, dedicated to how to build an archive through oral accounts made by witnesses. The methodological issues addressed were crucial for the construction of a solid historiographical basis for facing the challenges of ‘told’ history. Among them, it was discussed what is an oral archive and how it could be handled; why it is important to create new oral archives; what is their potential in historical teaching and digital development. It was a great opportunity to compare experiences, methods and projects spread across the territory, combining theoretical discussion with convivial activities and geo-explorations of the landscape. The participants were archivists, NGO workers, historians, students, and journalists interested in becoming familiar with the methodology of oral history and the construction of archives. In particular, many of them are involved with migrants and the collection and processing of their memories, which is in strong correlation with the aims of the ITHACA project.

On the first day, after the presentation of the participants in Fanano, the Archivio delle Voci project was presented. The participants moved then to Sestola where they visited the Rocca and discussed the School of Peace project. In the evening, several oral archives were presented and the discussion developed on the implementation of different methodologies for archiving and cataloguing oral material. The speakers also highlighted difficulties and problems related to specific methodological choices.

On the second day, several archive construction projects were presented. Among them, the ITHACA super-archive of migrant memories and self-narration was presented by Gianluca Gatta and Maria Chiara Rioli. In the afternoon and the following day, the participants were involved in local tour activities, combined with the discovery of the history of the area itself, narrated by the memories of the locals.

The school was a fertile and inspiring time for participants to meet and discuss the issues at the heart of the ITHACA’s project. This concerns both the method in which the migrant memory archive is constructed, both with respect to the way its access is made public.

This work is licensed under a Creative Commons Attribution 4.0 International License.

This website uses cookies to improve your experience while you navigate through the website. Out of these, the cookies that are categorized as necessary are stored on your browser as they are essential for the working of basic functionalities of the website. We also use third-party cookies that help us analyze and understand how you use this website. These cookies will be stored in your browser only with your consent. You also have the option to opt-out of these cookies. But opting out of some of these cookies may affect your browsing experience.
Necessary Always Enabled
Necessary cookies are absolutely essential for the website to function properly. These cookies ensure basic functionalities and security features of the website, anonymously.
Functional
Functional cookies help to perform certain functionalities like sharing the content of the website on social media platforms, collect feedbacks, and other third-party features.
Performance
Performance cookies are used to understand and analyze the key performance indexes of the website which helps in delivering a better user experience for the visitors.
Analytics
Analytical cookies are used to understand how visitors interact with the website. These cookies help provide information on metrics the number of visitors, bounce rate, traffic source, etc.
Advertisement
Advertisement cookies are used to provide visitors with relevant ads and marketing campaigns. These cookies track visitors across websites and collect information to provide customized ads.
Others
Other uncategorized cookies are those that are being analyzed and have not been classified into a category as yet.
SAVE & ACCEPT